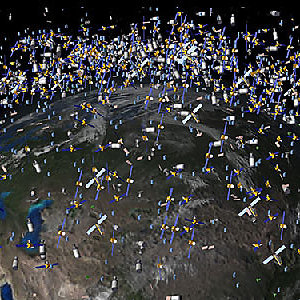 Satellites at the end of their life, rocket stages no longer being used, nuts, bolts - space is full of debris turning around the Earth. In total, some 34,000 objects larger than 10 cm have been observed at least once by radar or telescopes.

Objects in orbit can be dangerous as they can cause accidents both in space and back on earth, so experts are increasingly calling for measures to help limit debris in order to safeguard the future of space activities.

Among these measures are a number of ISO standards, for example, ISO 24113 which focuses on the requirements for space debris mitigation.

ISO 24113 aims to ensure that spacecraft and launch vehicle orbital stages (the engine sections used to propel the spacecraft that are discarded after use) are designed, operated and disposed of in a way that prevents them from generating debris throughout their orbital lifetime.

The standard is one of a family that helps avoid the release of objects during normal operation, helps prevent accidental break-ups and helps ensure that launch vehicle orbital stages leave the low and geostationary earth orbits where they pose most risk.

Other standards focus on preventing damage caused by collision such as ISO 11227:2012 which contains a test method to characterize what happens when a material used on the external surface of a spacecraft is hit by orbital debris.

A number of other standards are under development such as ISO 16158, which focuses on avoiding collisions using the Conjunction Data Message, and ISO 16126 that concentrates on the survivability assessment against impacts from small-size debris and meteoroids.

Other topics also in development include the standardization of space debris and natural environment models (ISO 14200) and the design and operation manual for spacecraft operated in the debris environment (ISO 18146).