The group of experts that develops International Standards for IT security techniques has been awarded the Lawrence D. Eicher Award for excellence in technical work. 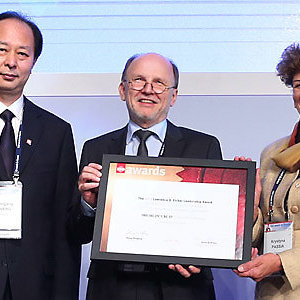 The distinction that recognizes the significant contribution of an ISO technical committee or subcommittee to the development of International Standards was presented during the 38th ISO General Assembly, which runs this week in Seoul, Korea.

“ISO/IEC 27001 has become a common language for organizations to protect their information and is now a leading standard for international certification in information security,” said ISO Acting Secretary-General Kevin McKinley during the awards ceremony.

Mr. McKinley commended the efforts the committee had made to ensure strong ties with industry stakeholders, conducting seminars for local businesses, at the same time as its working group meetings, to exchange and gain feedback on future needs for standardization.

He also celebrated the committee’s work in forming relationships with other industry and standards organizations, which ensures the presence of world-leading expertise within the committee and avoids reinventing the wheel.

This is the second time that a joint ISO/IEC committee or subcommittee has won the award and highlights the importance of working together to drive standards forward.

Secretary for the subcommittee, Krystyna Passia from DIN, the ISO member for Germany, and Chair Walter Fumy accepted the award on behalf of the hundreds of experts all over the world who contribute to the technical work.

In his acceptance speech, Mr. Fumy also thanked the more than 70 ISO members from all five continents that have supported the subcommittee’s work, many of whom have dedicated resources and nominated experts to take part in the development process.

This growing support reflects the ever increasing need for information security standards as “we migrate much of human activity from the physical world to cyberspace,” he said.

The Lawrence D. Eicher Leadership Award was developed in 2002 to acknowledge excellence and innovation in technical work as a tribute to ISO’s late Secretary-General, who served from 1986 to 2002.