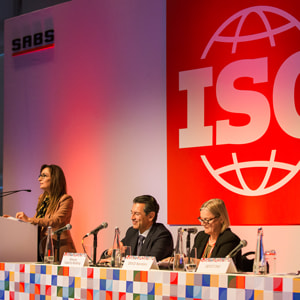 By Katie Bird
Tagged as

The participation of developing countries was highlighted as key in ensuring ISO can continue to deliver solutions into the future, at today’s meeting in Cape Town, South Africa, as part of the ISO Week 2019.

“This week, we have a unique opportunity to contribute to the process of developing the ISO Strategy 2030,” explained Lena Dargham, Chair of the Committee on developing country matters (DEVCO).

“I encourage you to use this opportunity and to contribute to this discussion. It will have a significant impact on us as developing countries, and we need to ensure our voice is heard,” she added.

The meeting is part of a series of events occurring this week including the ISO General Assembly, where the focus is on defining the future strategy for the organization.

Speakers highlighted the significant changes occurring in the world today, many of which will impact developing countries in particular. For instance, we are seeing significant shifts in global economic power that need to be considered when charting the future of an organization such as ISO, underlined Herman Warren, Network Director for Africa at The Economist.

Looking back to 1843 when The Economist was first published, the global economy was dominated by the United Kingdom, Germany and France, he said. The 20th century saw the additional rise of the United States and Japan. “Now we see that the centre of economic gravity in the world is shifting east. The two largest economies today are the United States and China but, by the end of the century, we expect to see China as the largest economy, followed by the US and then India.”

Warren also argued that the trade tensions we are currently witnessing linked to technology and related intellectual property may result in a bifurcation of supply chains. “This decoupling raises issues from a standards perspective where countries and businesses might need to make a choice as to who they work with,” he said.

For Bernardo Calzadilla-Sarmiento, Director, Trade, Investment and Innovation at the United Nations Industrial Development Organization (UNIDO),  “trade growth up until now has not been sustainable and we need to work together to ensure it benefits all actors, including small communities”.

It’s important for developing countries to participate in global value chains, echoed William Gain, Global Product Specialist for Trade Facilitation and Border Management at the World Bank Group, but additional policy choices and drivers around economic development are needed to ensure that benefits are sustained in the long term and shared equally.

Addressing these challenges to empower developing countries, and level the playing ground cannot be done in isolation. Gain underlined the importance of global collaboration: “International cooperation between organizations such as ISO, the World Trade Organization (WTO) and the World Customs Organization (WCO) is critical. The global approach has to be the answer.”

The power of collective action was also highlighted by ISO President John Walter in his opening speech. “We must move forward collectively to achieve our common vision and goals, and to deliver solutions to the world. More than ever, we need each other,” he said.

“ISO members have long cooperated and collaborated in the creation of International Standards and solutions. This is needed even more today than ever before. Together, we can achieve much more in this time of uncertainty,” he concluded.